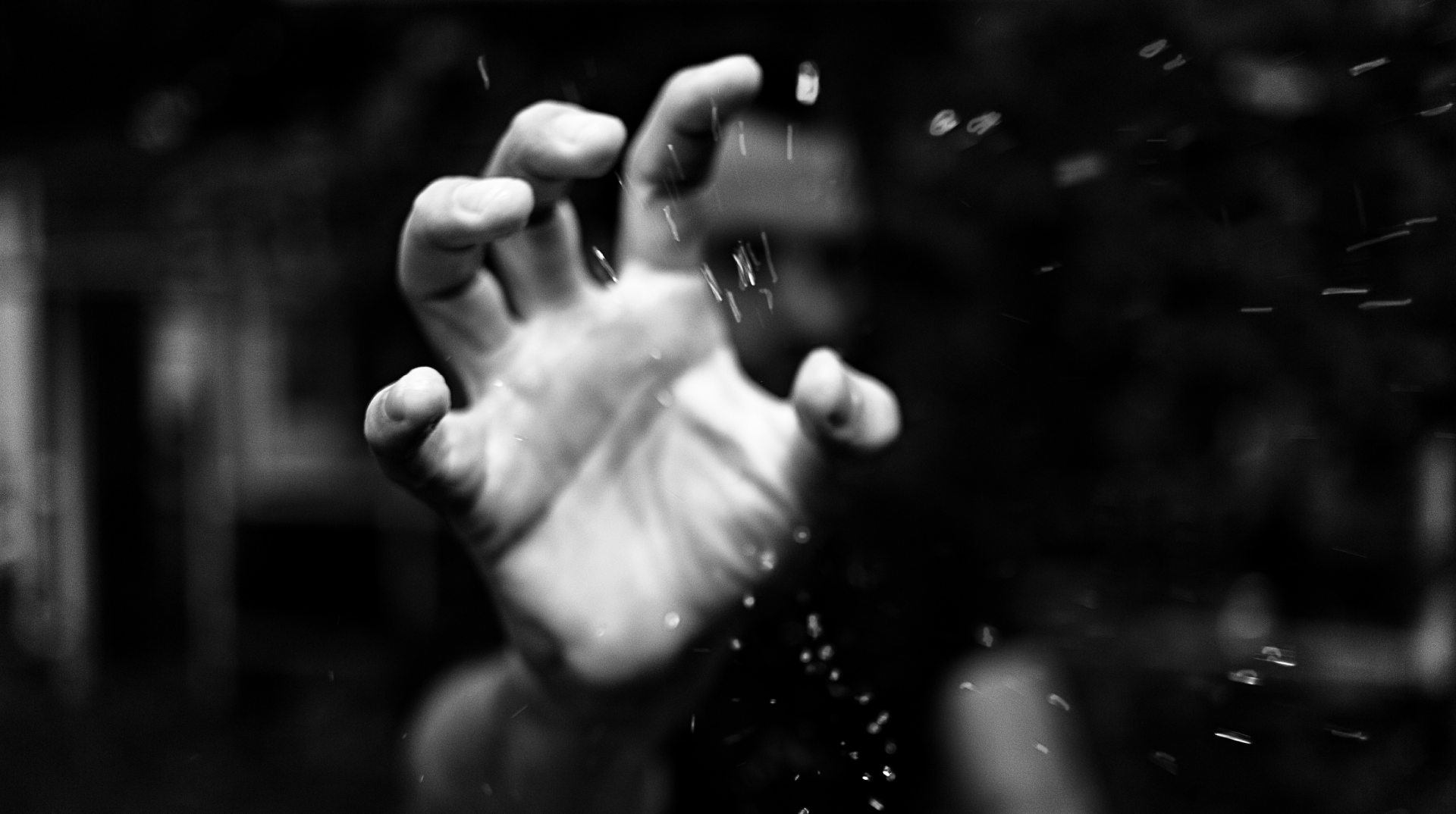 Pak Mei ("White Eyebrows") is a four centuries old authentic Kung Fu style that was created under the Manchu Qing dynasty (1644-1911) by the eponymous Taoist monk. According to the legend, Pak Mei would have developed his boxing style on the Emei Mountain that is located in the Sichuan province. Then, his heirs brought Pak Mei to Guangdong. In Guangdong the lineage split into two branches: Cheung Lai Chun’s / 张礼泉  and Lao Siu Leung’s / 刘少良 Pak Mei.

The authentic LWS Pak Mei Kung Fu school style is ferocious with fast and powerful punches. Pak Mei is focused on the interception and deflection of the opponent's movements, grabbing and controlling the opponent, as well as simultaneously parrying and attacking them. Pak Mei Kung Fu is explosive and conceived for close combat. Through full extension of arms, tonic hip swivels and postures, Pak Mei disciples reach explosive strength. This is a difference between LWS Pak Mei and Cheung Lai Chun Pak Mei, which strength is generated by back slams.

The tiger would be the animal that symbolizes the best the LWS Pak Mei school style, since it is simultaneously ferocious, fast, powerful and determined. However, Pak Mei was not conceived through the imitation of any animals. 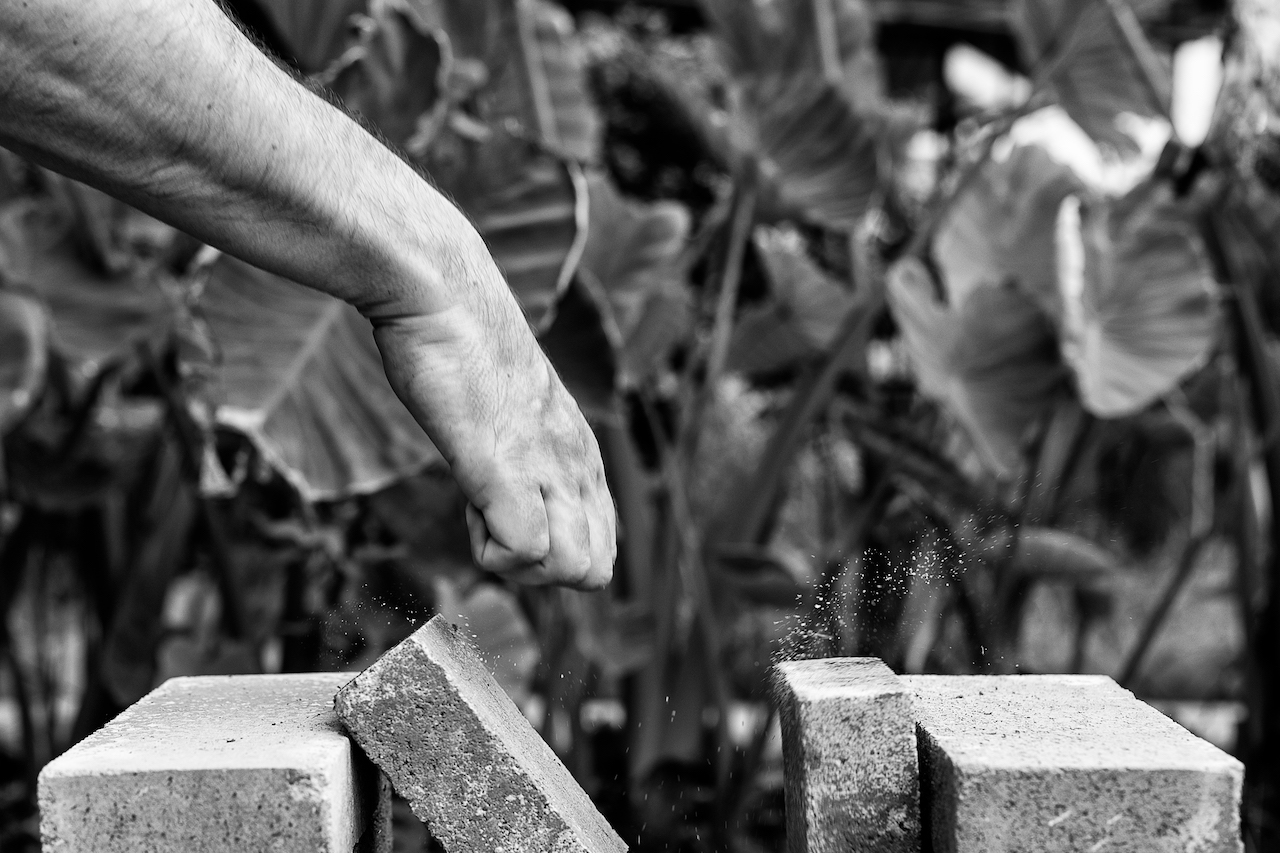 Pak Mei is both an intern and extern style that was created in South China. LWS Pak Mei school has stuck to the pursuit of a martial effectiveness and avoided the adaptation to a sportive practice.

Pak Mei relies on the principles of Taoism. Pak Mei associates the building of a robust defense with attack. Thus, both hands play complementary roles, allowing blocking the opponent or opening his defenses and giving a flurry of fast punches.

The most renowned fist of Pak Mei is called the Phoenix Eye / 风眼锤 , which targets the vital points of the opponent’s body.

Postures taught at the LWS Pak Mei School are relatively high, compared to other Kung Fu styles. The idea is to keep a full mobility like in real fight situations and to be able to quickly step forward or back. 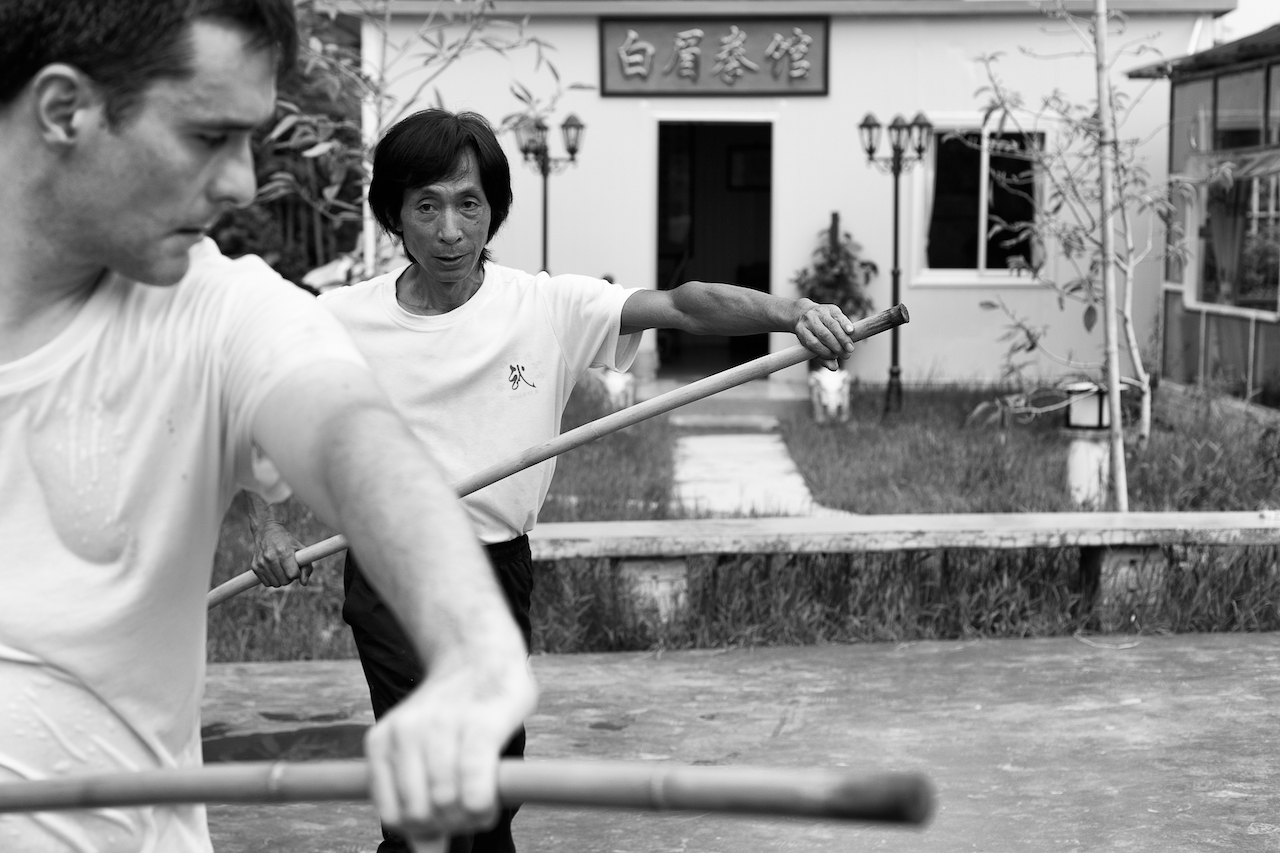 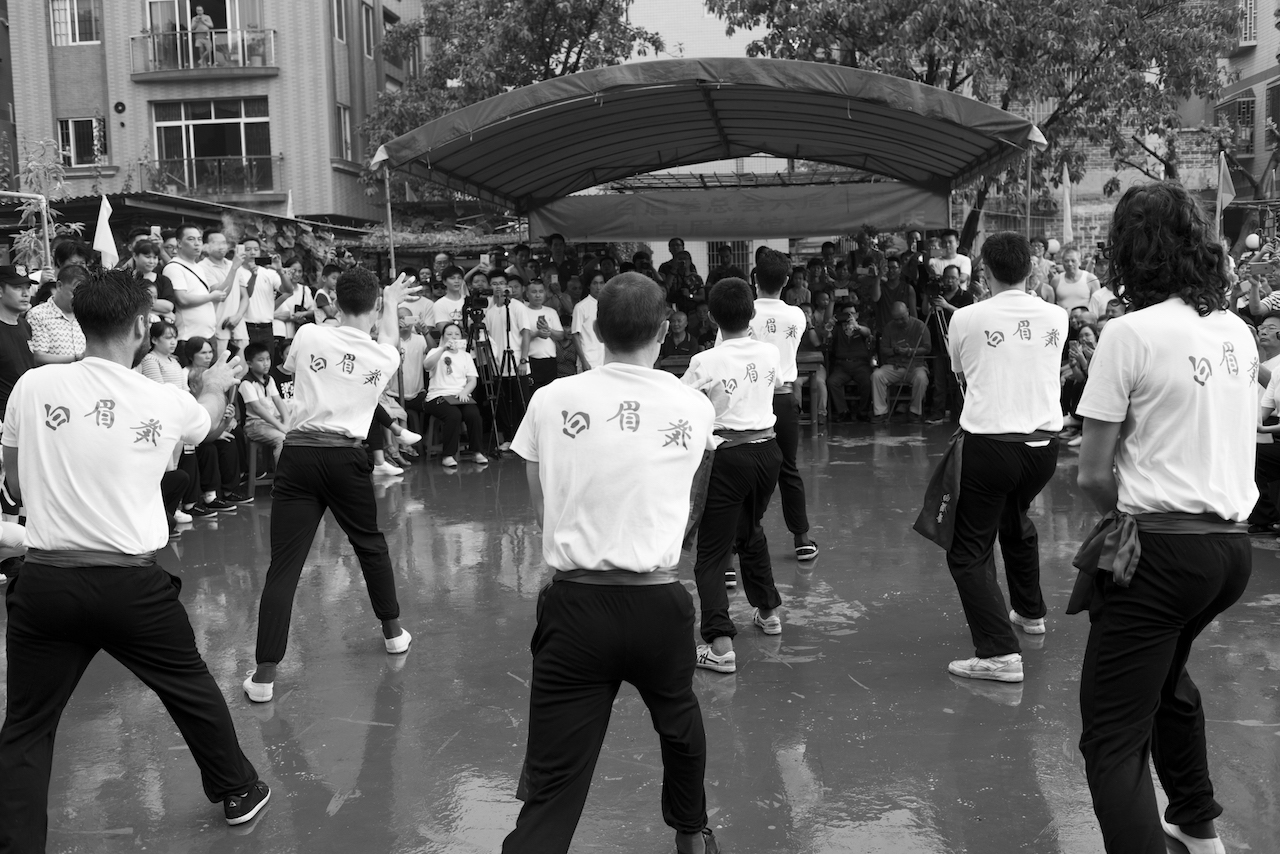 Forms, or Kune 拳, are codified sequences of movements that constitute the technical repertoire of the authentic Pak Mei Kung Fu. Disciples learn their repertoire through practicing.

Every form enables the physical development of the disciples and helps them to improve one aspect of their practice, such as strength or rapidity.

Many weapons are taught at the LWS Pak Mei Kung Fu School. They are considered as a prolongation of the body, and the learning process of weapons handling is directly linked to the bare-hands practice. However, postures are lower because of tactical reasons.

Firstly, practicing with weapons enables disciples to develop their dexterity and coordination for bare-hands fighting. Then, disciples understand the use and the specific features of each weapon (long or short, heavy, slicing or bludgeoning weapons).

A classical classification distinguishes between long, short, articulated and throwing weapons. However, we may also classify weapons according to their first purpose: war, like the saber, agrarian tools such as the farmer hoe and everyday objects like the umbrella, Chinese fan and even the bench.

In Foshan, lion dance is a practice traditionally associated with Kung Fu. Some people name it « dragon dance » or « unicorn dance ». Lion dances are very popular performances in China where it is attributed to the virtues of happiness and prosperity. It would have the property to drive away malevolent spirits.

With due respect for the Kung Fu tradition, Pak Mei learners of the LWS Pak Mei school learn lion dance and frequently perform demonstrations. The lion is a symbol of bravery and greatness. A successful dance brings fortune and honors to both the school and the performers.

Two performers animate each lion. One moves the lion’s head and the other one, its body. Their exact execution of a highly coordinated choreography gives to the audience the impression of a true lion. Besides the high level of their technical performance, dancers have to give a character to the lion they incarnate, which must look awaken, vivacious and expressive.

Lion dance is accompanied by the drum, the gong and cymbals. These instruments give to the lion the rhythm of the dance during demonstrations. Disciple of the LWS Pak Mei School learn to play these instruments.

The aim of every Kung Fu styles is to develop the effectiveness of their movements through their proper methods.

The practice of traditional Kung Fu is in a majority of cases associated with a specific workout named Qi gong - literally "breath workout". Qi gong is an authentic method based on the understanding of energetic structure and natural breath. It reinforces the learners’s muscles, tendons and ligaments.

Through Qi gong exercises, the learners maintain the suppleness of their joints and muscles, and their strength, while they also develop their concentration, their 3D memory, their coordination and balance.

This Qi gong reflects the important place given to health maintenance by the LWS Pak Mei School. Disciples maintain their physical abilities through their Qi gong lifelong practice. 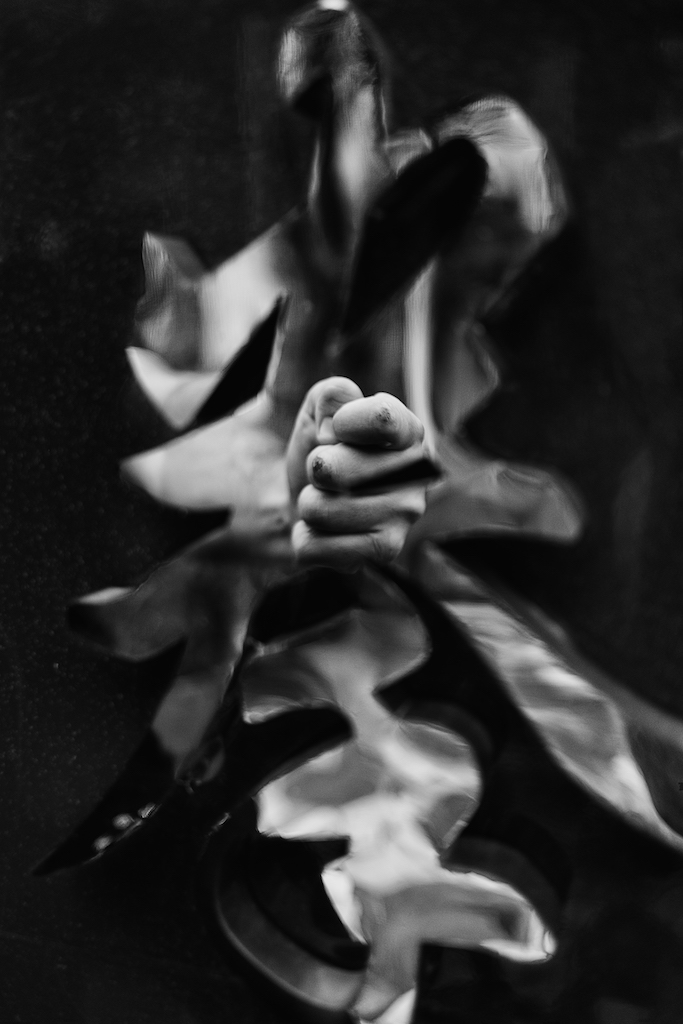 The origins of Pak Mei Kung Fu are shrouded in mysteries and legends. Among these legends are:

Under the Qing dynasty (1644-1911), the Shaolin temple would have been suspected to harbor revolutionaries. Thus, Emperor KangXi sent the army to burn the temple. Five monks called the "Five Invincibles" would have escaped from the destruction: Ng Mui, Fung Dou Duk, Chan Ji Sin, Miu Hin and Pak Mei. The first four would have gone to Guangzhou, while Pak Mei would have gone to the Emei Mountain, in Sichuan, to create his martial style.

Finally, according to the Ving Tsun /詠春拳 legend, Pak Mei would have been one of the five founders of this fighting style. Actually, these legends are not really documented and their main interest is to maintain the mystery that shrouds the creation of the traditional Pak Mei Kung Fu.

Traditional Kung Fu Pak Mei is highly respected among the people in China. Its place as one of the rarest styles taught to the Imperial guard, or its reputation among Chinese martial artists of being highly technical, may explain this notoriety/ 武林高手.

Nowadays, the presence of the monk Pak Mei in a majority of Kung Fu movies, and in Chinese sword and cape novels, may explain the popular notoriety of Pak Mei style. Monk Pak Mei is often pictured as a fearsome Kung Fu master with ruthless techniques. The latest movie was Kill Bill 2 by Quentin Tarantino. Pak Mei, who was played by Gordon Liu, was teaching to Uma Thurman the recoilless strike that is one of the specificities of Pak Mei Kung Fu. 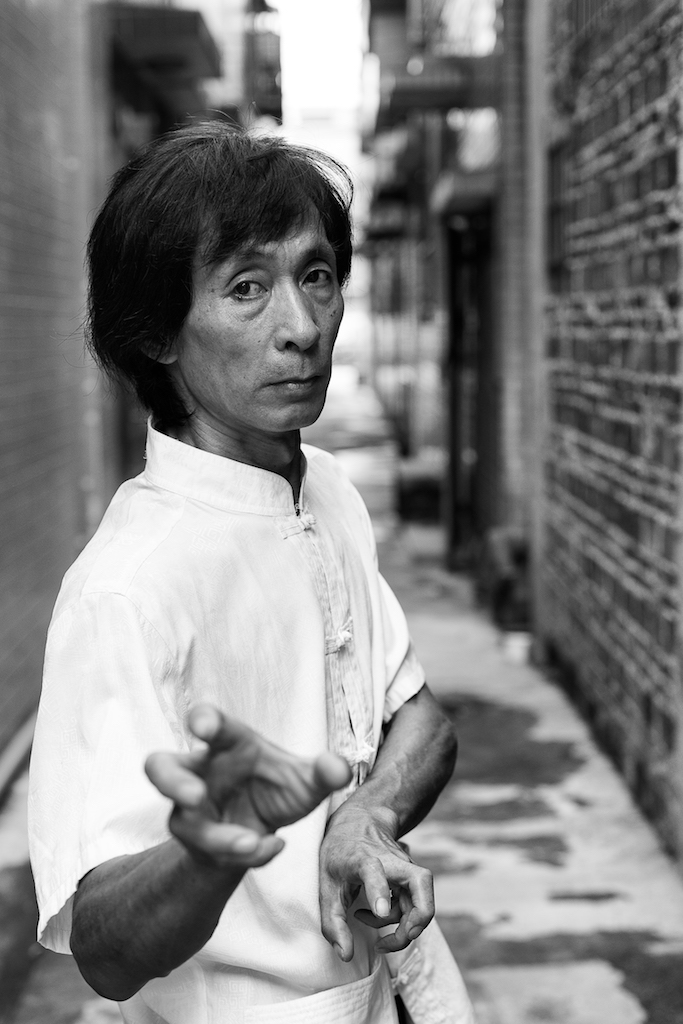 Martial virtues are the moral code of a Kung Fu school and tradition. The three principal Chinese trains of thought, namely Taoism, Confucianism and Buddhism (from India), inspired these virtues. By honoring these virtues, Kung Fu disciples elevate themselves spiritually to become truly virtuous men, free of their choices.

All the Kung Fu schools and traditions have their own virtues. Among those of the LWS Pak Mei school are benevolence, humanity, courage, filial piety, courtesy, equity and loyalty. This code of ethics may be summarized by the following precepts:

尊祖尊师尊武德, which means "Honor the Ancestors, honor the Master, honor Martial Virtues". This adage means that every disciple must honor their martial lineage through their attitudes and acts. Regardless of their motivations to learn Kung Fu, disciples must always show respect toward their Master and his teaching. This also means that disciples must respect each other, regardless of their age, their background and level.

From the first classes, disciples learn some effective Pak Mei martial techniques, applied in situations that exist in the real world. These techniques sharpen the natural weapons of their body and their mind to some situations of confrontation.

During their learning process, disciples will understand the importance of movement repetitions. They develop and improve their techniques through such workout and efforts that they understand the true meaning of Art.

Disciples of the LWS Pak Mei School have to realize that their level and progression, comparatively to other disciples, depend on their training efforts and their personal commitment. While the Master gives to every disciples the opportunity to surpass himself or herself, his attention and teaching depend on the disciples’s merit, which means rigor and willingness to learn.

The practice of the genuine Kung Fu of the LWS Pak Mei School should provide to the disciples the ability to defend themselves, and also to make their own choices and act with benevolence. As Lao Wei San says, "the one that follows the Way does not crush the others ».