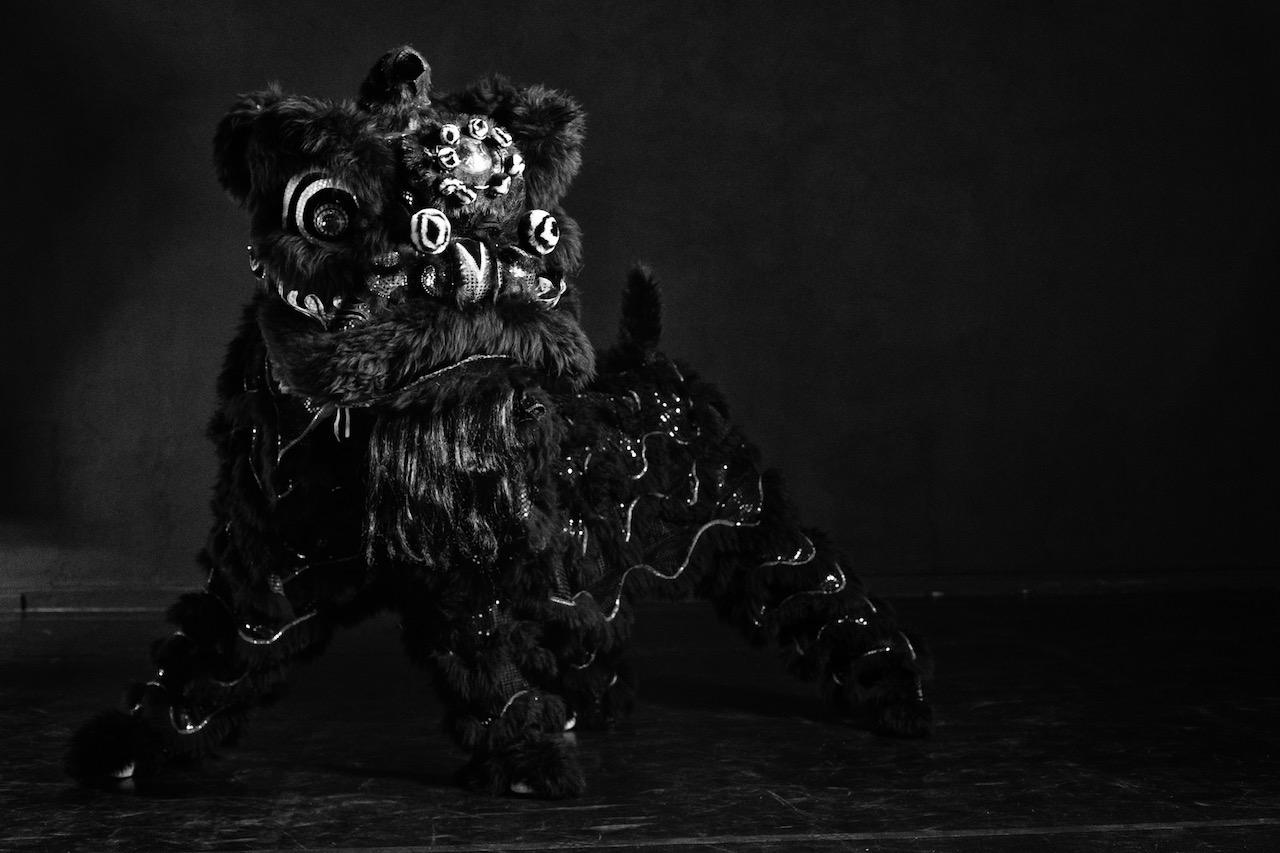 The Lion Dance is sometimes named the Dragon Dance or the unicorn Dance. This is a very popular show, greatly appreciated in China. It is supposed to drive away the malevolent spirits and to bring happiness and prosperity. Our troupe gives demonstrations for important events such as marriages, birthdays, inaugurations of companies, and private festivities or events for companies. 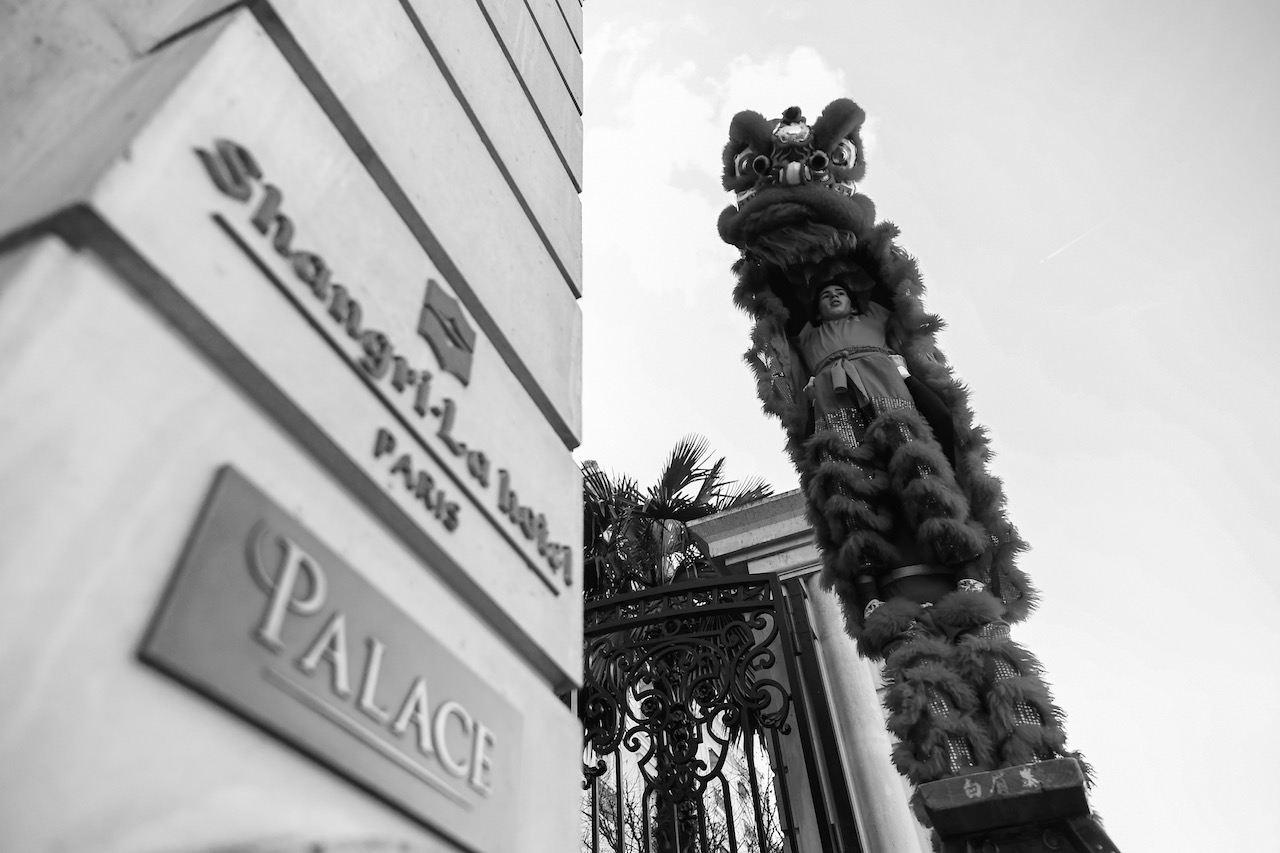 Two dancers personify each lion, one moving the head and the other one moving the body. Their choreographed and highly coordinated moves breath life into to the mythical animal, and give to the audience the feeling of being in front of a lion instead of two disguised dancers. Besides the execution of technical movements, the dancers have to give character to the lion they incarnate, so that the lion looks vigorous, expressive and alert.

The colors of our lions’ coats are saffron, golden yellow or red. The Colors symbolize the heroes of the Three Kingdoms period:

A drum, a gong and cymbals accompany the Lion dance. The drum stands for the pulse of the heart beat of the lion. A particular rhythm is associated to every steps and routines of the Lion. Each school has its own rhythms. The gong and cymbals stands for the thoughts of the Lion. With the drum, they accompany, they create the music of every routine. 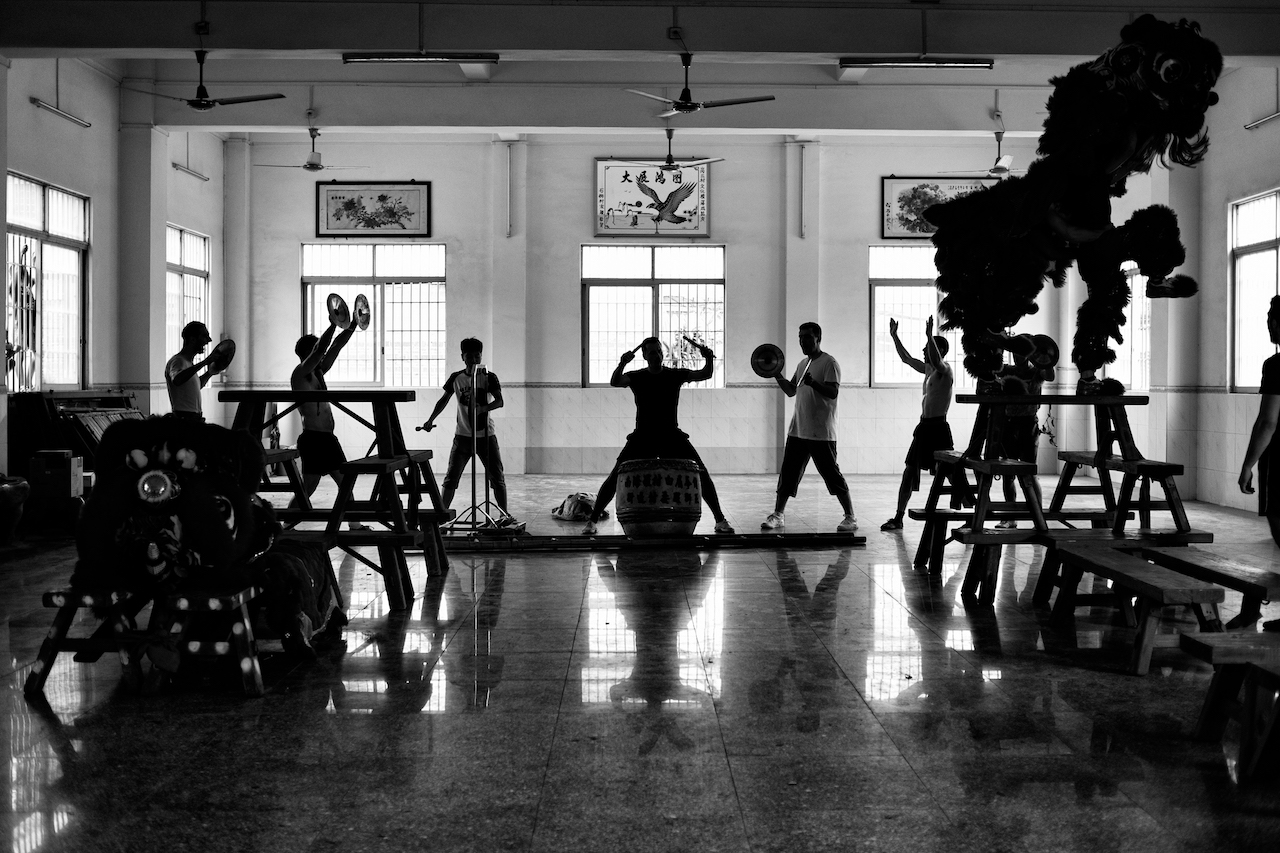 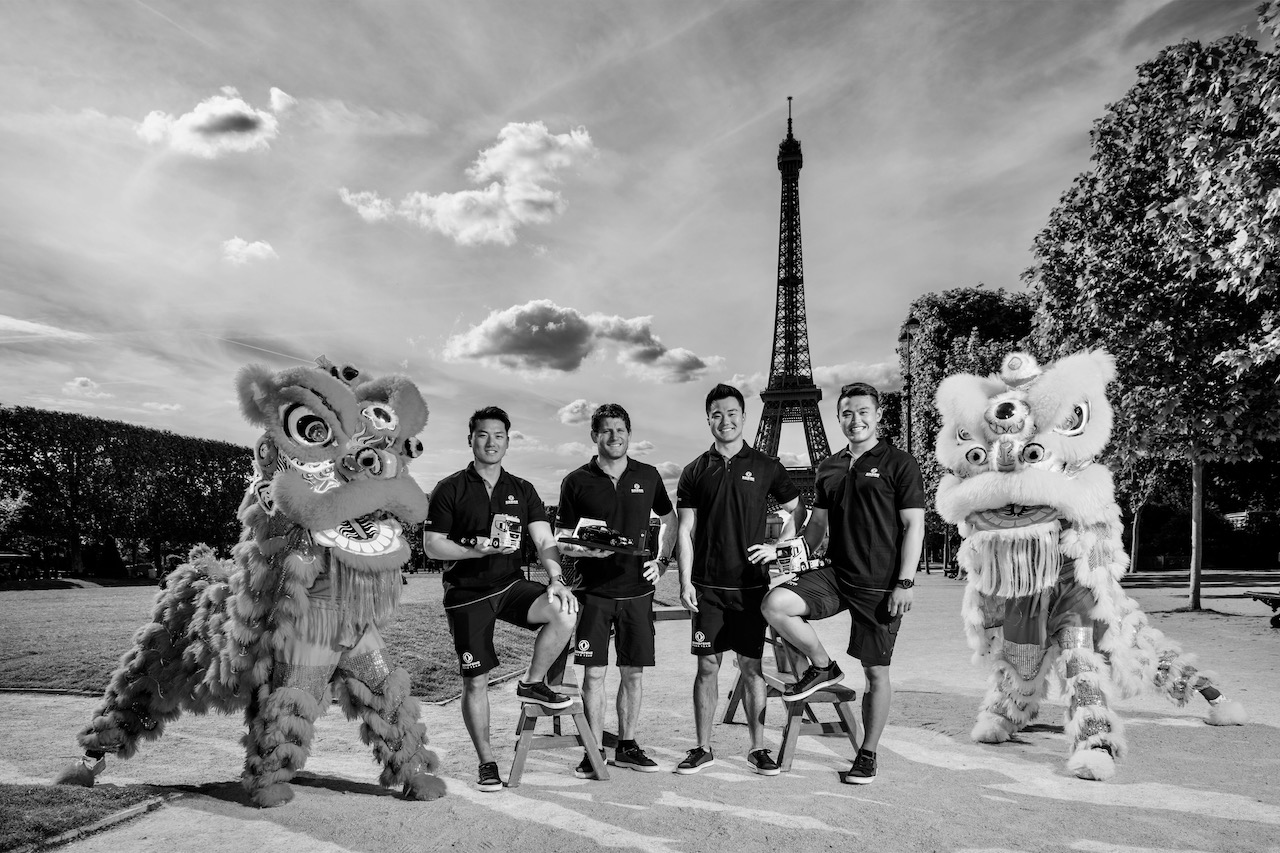 The Lion Dance was codified and named “dance of the three stars” / 三星 in Foshan by Wong Fei Hung. Since then, their moves have become quicker and much more tonic : “the seven stars” / 七星. The Lion may move on the ground, on benches or poles, depending on the place where the dance is executed and to the agility of dancers.

According to the legend told by Sigong Chan Yau Man, the Lion Dance was created during the Qing dynasty. Ferocious beasts repeatedly stormed a village near Foshan / 佛⼭, terrifying the population and destroying the harvest. As a counter-attack to this threat, the villagers decided to build a legendary Lion with feathers and canvas. They put it at the center of the village in order to scare the beasts. As the attacks stopped, the villagers attributed credit for
this victory to the Lion, and chose to celebrate it every year. 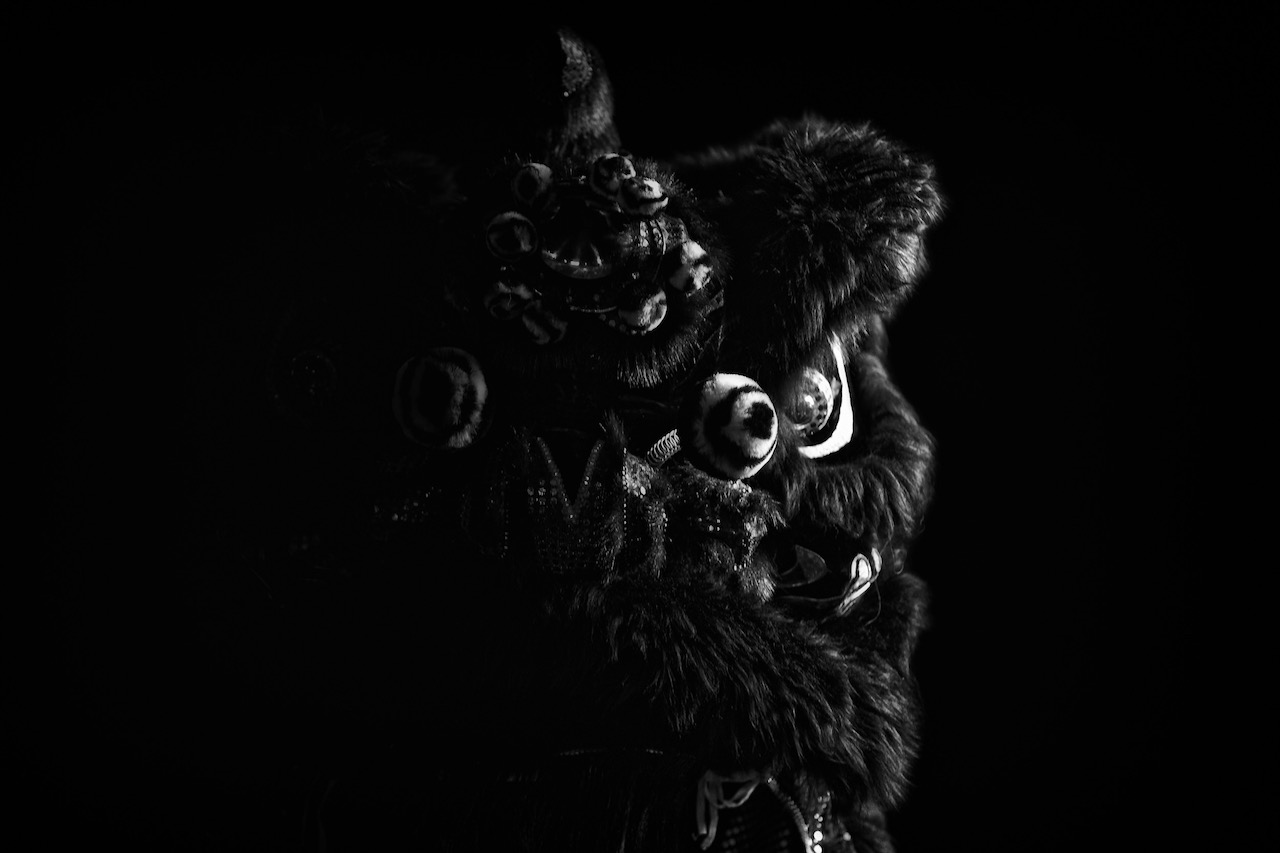 Every Kung Fu school in Foshan must have their own Lion Dance troupe. Thus, it was evident that I had to create my own troupe when I opened my school in 2011. This troupe gathers the most assiduous learners and disciples in our school. Besides training the dancers in France, I help them to increase their level in Foshan with my Sifu, so that they can truly experience this culture. The ability to give life to the Lion and to move like a lion is not a question of jump height or of athletic performance. The most successful dances are those that create the illusion that a lion is in front of us. This is a requirement to be part of our troupe. Nowadays, we collaborate with the most prestigious brands associated to Chinese culture, namely the Guimet museum, the Chinese Business Club, town halls of Parisian districts and the palace Shangri-la. We honored our first contract in China on the 5th August 2015 when we were invited by the president of martial arts in Foshan. Furthermore, since 2012, our troupe demonstrates the lion dances every birthdays of Lao Wei San’s Kung Fu school in Foshan. More than simply honoring the contracts, my aim is to truly bring back the reputation of excellence of this Chinese tradition.

Sigong Chan Yau Man and Sifu Benjamin Culos choreographed all our dances. Stories told by our dances vary with the challenges the lions meet. 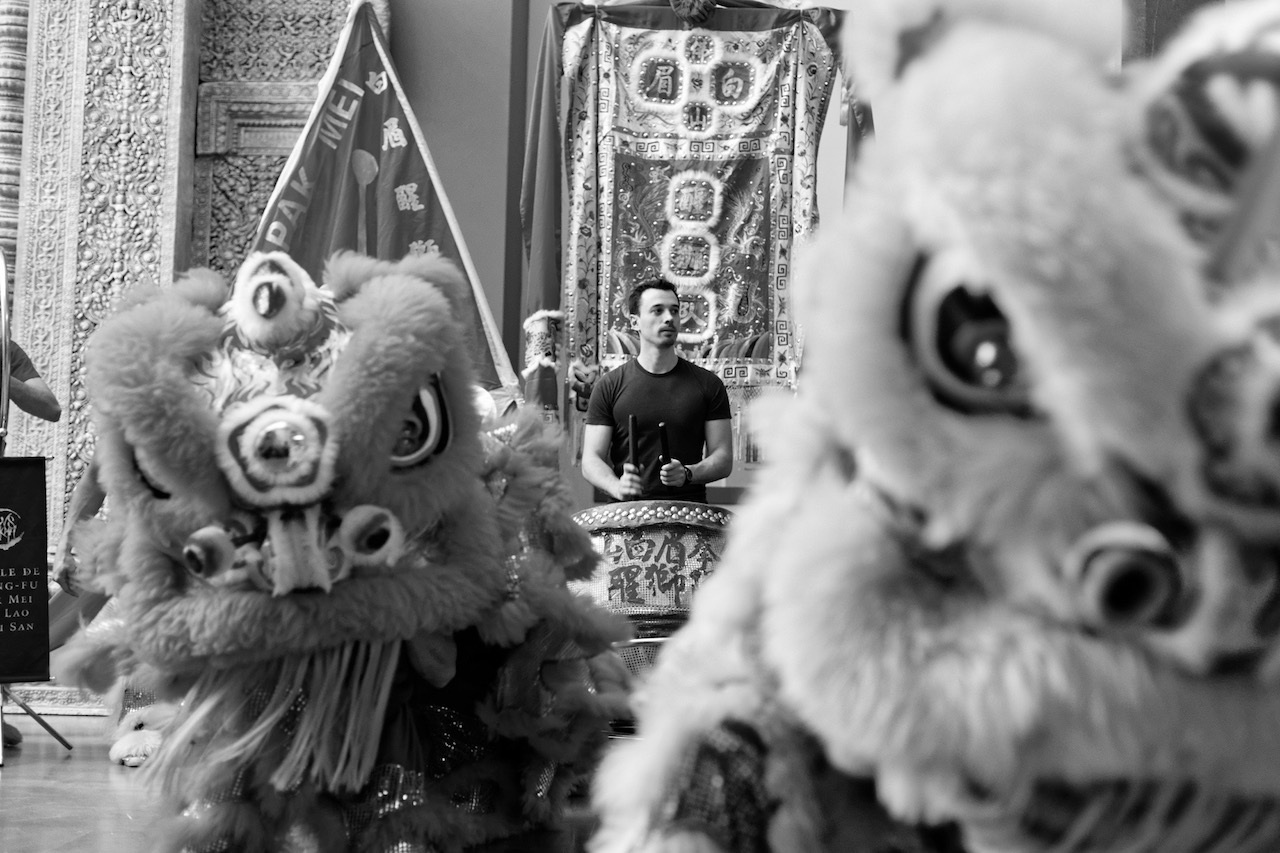 Dances performed by several lions are festive and lively. It spotlights the good relationship between the lions, and the feelings they provide, spread because of the coordination between the dancers. The Lions move, run, play, roll and jump. The remarkable synchronization between the lions and the acrobatic tricks they perform will delight your guests.

Braving the danger and overcoming our fear to reach our goals are the ideas expressed by this stunning dance. The lion will reach the top of a five meter-mast to bring prosperity to your company. 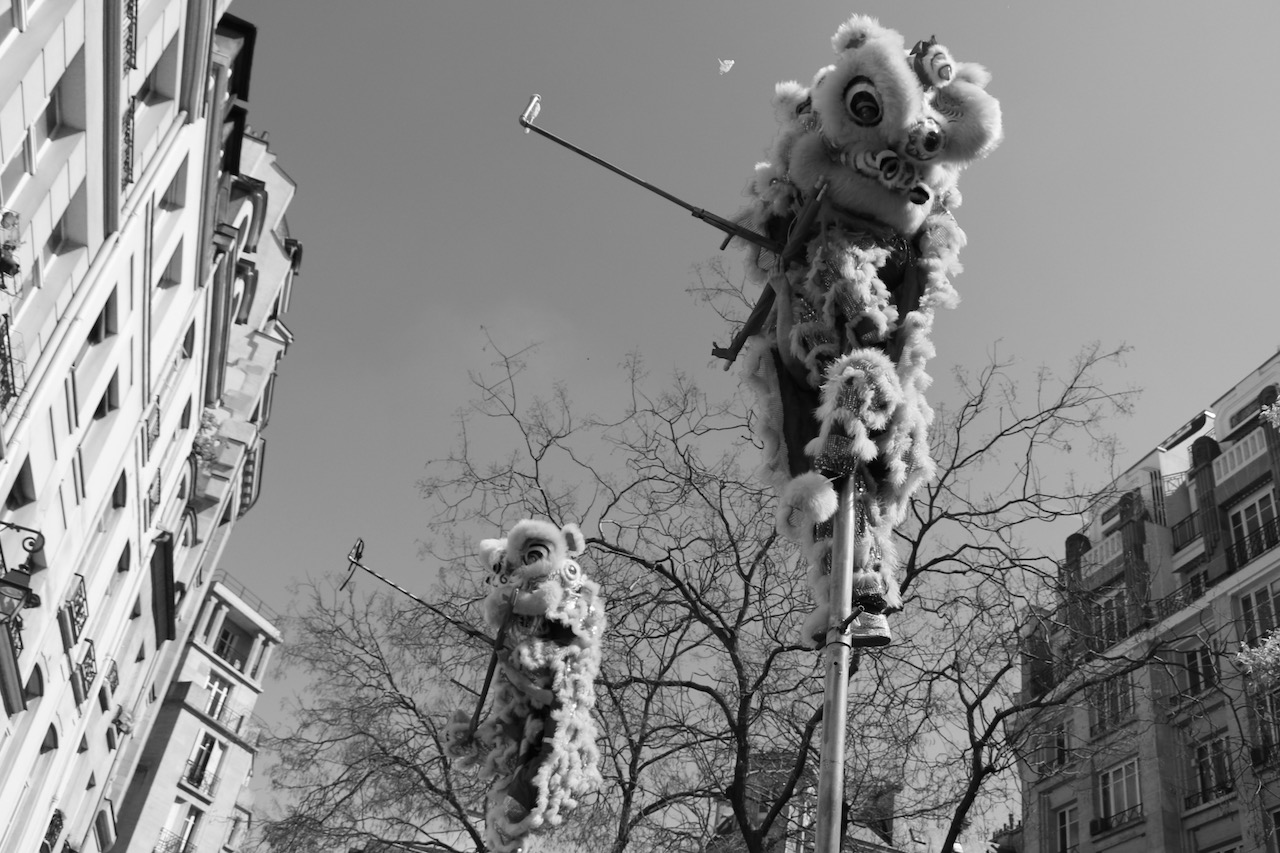 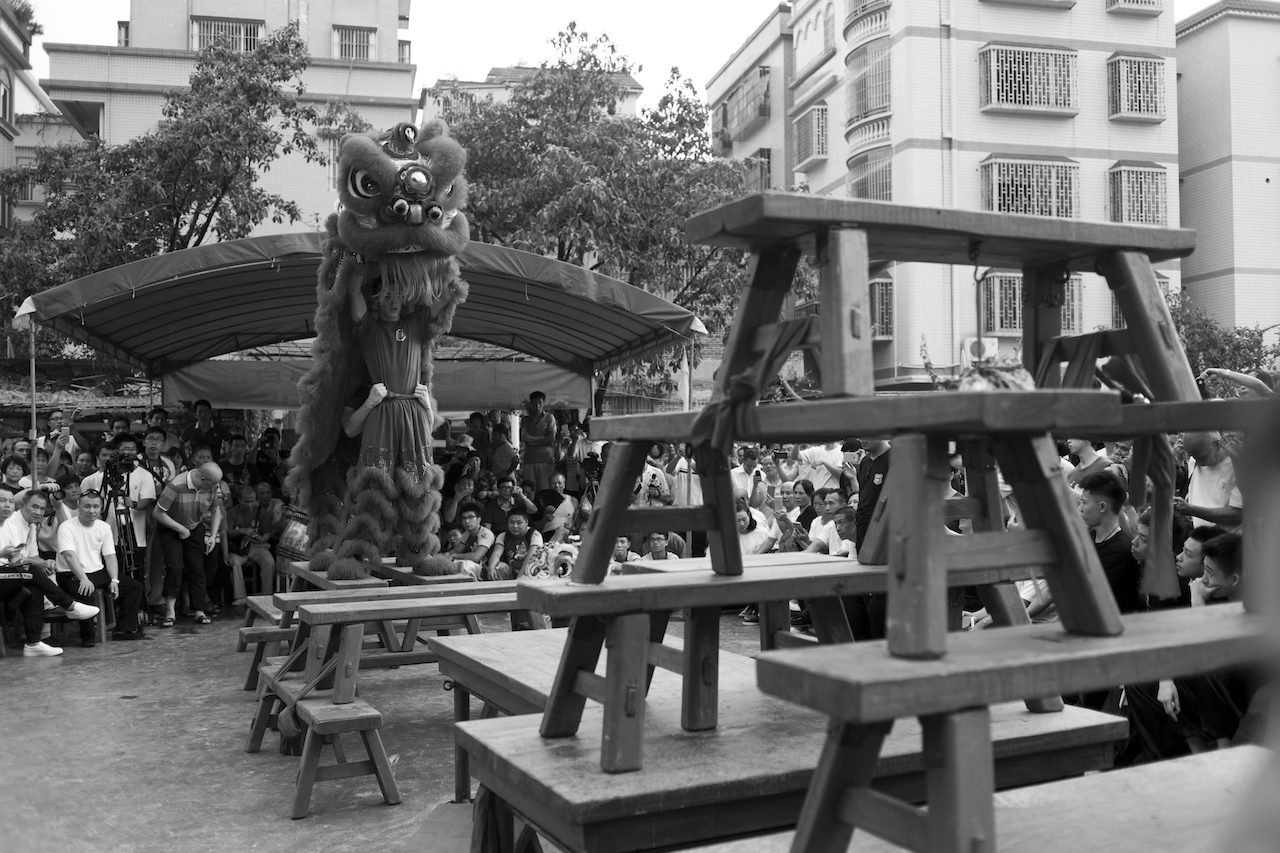 步步高升 The mountain of benches

In this truly audacious and spectacular dance, the lion jumps over a mountain made of benches. After beginning its dance on the ground, the Lion jumps over 6, 8 our 10 stacked benches that represent a mountain. The top of the bench mountain is from 1.20 to 1.50m height. The difficulty of this performance and acrobatic tricks are highly enjoyed by the audience. This sensational and vibrant dance symbolizes the ascension toward success.

花鼓 The course of the show

The orchestra plays several minutes to announce the festivities, allowing the audience to take place and immerse themselves and get the spirit and the energy of the demonstration. 画龙 点睛 Then, we beckon the officials to paint the Lion’s eyes. This action awakes the Lion, and according to a legend from the Qing dynasty: The Emperor Qian Long asked an artist to paint a dragon. As the painter brought his finished artwork, the Emperor noted the eyes apples had not been painted. The painter argued that painting the eyes would have given life to the dragon and that two dragons could not live in the same palace – the Emperor is considered being a dragon in China. Since then, painting the Lion’s eyes has always been used to start a Lion Dance. 舞狮 Being awakened, the Lion greets the place and begins a routine that conveys happiness, ferocity, doubt and ardor. The Lion executes a sequence of spectacular jumps until it reaches the salad 采⻘青. Then the Lion falls asleep and the troupe uses this moment to pass out the flyers that wish health for the body and the spirit. 身⼼心健康 The Lion will then finish the routine with greetings.